Problems with installing OpenKM? No problemo, the solution is closer than you think.
Forum rules: Please, before asking something see the documentation wiki or use the search feature of the forum. And remember we don't have a crystal ball or mental readers, so if you post about an issue tell us which OpenKM are you using and also the browser and operating system version. For more info read How to Report Bugs Effectively.
Reply

First of all sorry if this is not the correct section.

I've just installed OpenKM 6.3.11 through Docker (using the latest image) and seems to be working for the most part.
I'm able to login, navigate, upload, download etc. yet the preview of PDF docs upload is unavailable...

Checked the logs and there are no errors reported in either catalina or openkm.log

Is something else required for the preview to be available on the docker setup?

So it seems the latest docker image is effectively missing some files / configs...

was NOT set on the Docker installation. So I've copied the "pdf2swf" executable file from the Tomcat installation (file provided by the bundle or the installer, can't remember) to the Docker container, updated the config from the Administration panel and puff the previews are working now.

* Check what previewer do you have configured, if you changed revert to PDF.js again
* Can share a screenshot for better understanding ( if possible share a sample PDF here because I would like to test in our development environment )

From what I see there is no preview, at least in the docker image I'm using (which is image: openkm/openkm-ce:latest in the docker-compose file).
Attached you'll find what I mean (see

By the way, I don't think it's a file issue as I had the same behaviour with the attached test file as well with different PDFs.
If you think it is a file issue (and I'd be curious if that's the case) I'll upload also the one correctly previewing in the following screens. 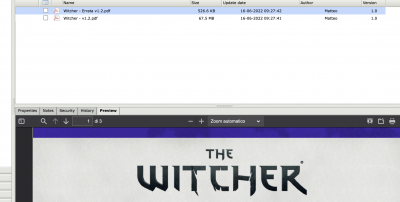 From what I can tell, after setting the "swftools.pdf2swf" config (as it was pre-configured in a bundled Tomcat or through the installer) it started to work.

Let me know if you need more details.

EDIT: forgot to mention, the screens with the issue are from a newly deployed container, so nothing did on that one (deployed the container, set the correct config to the DB and login) so that is "as-standard-as-possible" situation.

Selección_062.png (91.42 KiB) Viewed 23 times
Be sure you have disabled the "Acrobat plugin preview"