OpenKM has many interesting features, but requires some configuration process to show its full potential.
Forum rules
Please, before asking something see the documentation wiki or use the search feature of the forum. And remember we don't have a crystal ball or mental readers, so if you post about an issue tell us which OpenKM are you using and also the browser and operating system version. For more info read How to Report Bugs Effectively.
Post Reply
13 posts • Page 1 of 1

Hi guys
i want to extend some features of browser panel ( i cant find any detail about browser panel in documentation)
my requirements include :
1- Delete a column from browser panel
2- Add a new column to browser panel at proper place ( for example after Name column and before Size column ) to show a feature of documents
3- Change icon of a row
I explain this things also in the attached image 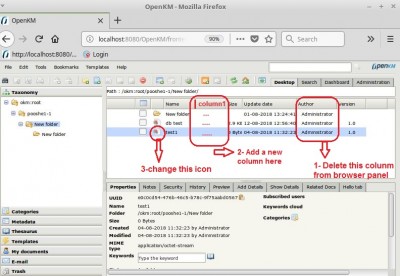 Better than remove default OpenKM columns etc... is extend profiles or make then visible with an extra variable. Consider that we upgrade the code periodically and if you do not take care on the way you are doing changed, you will have a trouble when we upgrade it. The best option is hide columns from profiles ( it's done in professional version and if it's not done in community might be good idea introduce it ).

well , thank you , i read the whole classes and now i know how to hide a column
But about adding a new column :
i found that there is two kind of columns in GWTProfileFileBrowser class
1-columns like status,name,size,version,last modified and ...
2- columns with name starting from column0 to column9 that named Extra columns or Additinal columns

The only problem is that i cant move this extra column to another position.
thank you so much for your hints
Top

I have a similar requirement and would like to know how you did exactly to add a column.

I have to rework a huge list of files manually, which means I have to assign metadata to each of the file

It would be fine, if I could see, if there is still a metadata/ property group assigned or not, or which metadata group -name (only the highest level)
Field: "npg_group"
Then I will be able to see, if a file is reworked or not.
For this I thought it should be possible to add a column with the property group-name.
But I still can not find a way to do it and if possible, I don't want to go to deep in the code

Take a look at the last tab in the profiles, from there you can add new columns based in metadata values. Consider that this feature might decrease the performance of your application, I do not suggest enable for everybody.
Top

Hello Jllord
thank you very much for your help!
This was new for me and I had a look on it, but this is not what I search for.

More or less it would be enough to see if a metadata-group is assigned for the document or not.

Similar like the property-tabular of a document.
If I assign a metadatagroup perhaps with the name "Invoice", then the tabular which is visible in the properties it's named "Invoice"
The best case for me would be, if I could see the first assigned meta-data group label, like "Invoice" in the new column.
like a document content-type

Thank you again for your kindly help
rgds Heinz
Top

Did you tried to enable metadata column field from profiles as I suggested?

There's not an option to add a column that indicates if a document has or not a group, you only can show a metadata field as a column value.

For my point of view this is a bad approach to solve the problem, really you have some documents what should have metadata. I think will be more interesting having a daily report ( might be a crontab task or standard report sent by mail ) with a list of documents what should have metadata and they do not have. Depending on the nature of your problem the report is a simple SQL or something more complex, usually in this kind of scenarios, it will be better be updated about what is missing rather looking yourself manually.
Top

my requirement is still based on my current situation.
I startet to work with OKM. I uploaded around 1000 documents and have to move it into a taxonomic structure and have to add meta-data groups based on the type of a document.

My first try was, to add metadata (based on the preview of the document) and after that move each document into the specific taxonomic folder/ subfolder.
But the update of the filelist needed a long time after each single document move.

Out of this I tried to add only metadata and move a couple of documents into the specific taxonomic folder/ subfolder.
But with this way, I can not see on which position of the filelist I am/ or was.

My third idea was:
If I could see in the filelist the state if a metadata assigned or not,
I would add manually the metadata and after that I could rework through all documents and move all documents by a script based on defined rules into the specific taxonomic folder/ sub folder.

I hope I could explain my situation?
(I am not a native english speaker/ sometimes difficult to describe my thoughts in english

)
But at least I understood that there is no solution to solve my requirement out of the box.

Did you know, if there is a possible solution
a) to walk through an exiting folder
b) open metadata dialog
c) after saving the assigned metadata
d) get another dialog, to ask in which folder the file should be moved
e) go back to a

The automation function, which I still had a look on it did not fulfil this really/ or I did it not understand completely
Thank you in advance
rgds
Heinz
Top

An option might be set destination folder and metadata based in a CSV file, the idea might be:

Thank you very much for your help!
I have to think about.
Let's see how I will realize it.
rgds
Heinz
Top
Post Reply
13 posts • Page 1 of 1